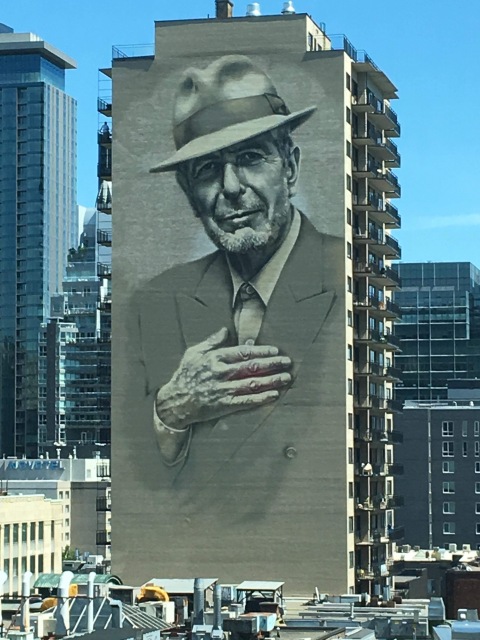 Riding the metro in Beijing the other day, listening to Wolf Parade’s track ‘Valley Boy,’ I suddenly had this moment of vertigo as my mind was riding the 55 bus up blvd. St-Laurent back home in Montreal.  ‘Valley Boy’ is a tribute to Leonard Cohen, our city’s patron saint of letters.  Wolf Parade, though from Vancouver Island, are also a Montreal band.  A few minutes later, my friend, Darryl, who is in Montreal from Alberta this week, sent me this photo.

There is nothing more alienating than to feel yourself in a city over 11,000km away from where you are.  But I was in Montreal.  But not the shiny Montreal of 2017, the grittier Montreal of the early 2000s, when the Main was half dug up in construction, and the rest was littered with discarded coffee cups and remnants of the weekend’s detritus.  In those days, it wasn’t uncommon to see Cohen wandering around, visiting his favourite haunts, talking to the occasional person brave enough to actually approach him.

I never did.  He was Leonard Cohen, He wasn’t a man for small talk, or pointless conversation.  I did, though, meet Cohen once, a long time ago.  It was the early 90s, he was touring behind The Future, and in a laundromat in Calgary, there he was folding his laundry as I was putting mine in the dryer.  It was a random meeting and he dropped a sock, I picked it up for him.  We talked for a bit, about nothing and everything and then he went on his way.  I still don’t know why he was doing his own laundry on tour.

Montreal is changing, soon it have the newest infrastructure of any city that matters in North America.  Every time I go home, I hear more and more English, and not just downtown, but on the Plateau, in the Mile End and in my old haunts in Saint-Henri and Pointe-Saint-Charles.  But even worse is the creep of major chain retailers.  It used to be that Montreal was a holdout against this invasion.  It was a city of small shops, mom and pop outfits, all up and down the Plateau, even downtown and in the other boroughs.  I bought a stereo at a small store on Sainte-Catherine near MusiquePlus that has been shuttered for over a decade now, killed off by the Best Buy.

Montreal is losing its soul, I’m afraid.  I take no pleasure in saying this, in fact, it hurts my own soul to say so.  But there is a deep and dangerous cost of the gentrification of the city.  My buddy Steve is a New Yorker at core, even if he long ago escaped.  Each time he goes home to Queens, he is more and more appalled by what he sees in Harlem and Brooklyn and even Queens.  Sure, it was a safer city and all that, but it was losing its soul.  I always felt smug in the belief my city couldn’t do that.  And better yet, my city was never crazy violent and it had, by the early 2010s, appeared to have recovered from the economic uncertainty of the separatist era.  Hell, for a few years at the turn of the century, Montreal was actually the fastest growing city in Canada.

And so Leonard Cohen has been dead for almost two years.  In ‘Valley Boy,’ Spencer Krug, one of the frontmen of the band, sings:

The radio has been playing all your songs
And talking about the way your slipped away up the stairs
Did you know it was all going to go wrong?
Did you know it would be more than you could bear?

In interviews, Wolf Parade have hinted this was about the larger geopolitical shitstorm that was engulfing the world when Cohen went to his great reward.  As I was riding up the Main on the 55 bus in my head the other day, I thought differently.  This was about Montreal, a city they and I have all moved on from, and one that Cohen left many times.  Of course, Cohen also said that you can never leave Montreal, as it travels with you wherever you go and it calls you home.  Later on the album, Krug sings, ‘Take me in time/Back to Montreal.’  And so we never do really fully leave.

An old friend visited us this weekend, and as he and I drove up the Massachusetts coast to hunt down the best pizza in the Commonwealth (Riverview in Ipswich, if you’re wondering), we got to talking about New England.  Despite having lived in New England, he always feels like he could never penetrate the insularity of New England culture, and he always feels alienated here.  I found that interesting, given I don’t feel that way at all, despite obviously being a transplant.

This might be the advantage of being an Anglo from Montréal. Anglo Montrealers are always at least slightly alienated from the city and dominant culture.  We are a (small) minority, and we speak a minority language.  That isn’t necessarily a bad thing, mind you.

I’ve always felt alienated from my surroundings. I grew up in British Columbia, very aware of the fact I didn’t belong, which came out in everything from my distaste of the wet, soggy climate to continuing to cheer for the Montréal Canadiens, Expos, and, when they existed, the Concorde or Alouettes of the CFL, as opposed to my friends who cheered for the Vancouver Canucks, the BC Lions and either the Toronto Blue Jays or Seattle Mariners.  I felt similarly alienated in Ottawa.  It was only when I moved back to Montréal I finally felt comfortable in my surroundings.  But I still felt alienated from the larger culture, mostly due to language, even as my French language skills improved.

But, as with all things Montréal, it was never this simple.  My Anglo friends and family dismissed any suggestion I might be a Montrealer, by continually reminding me I grew up out west.  On the other hand, my francophone and allophone friends made no such distinction, and this is also true of my separatist friends.  Go figure.  Anglo mythology would have it the other way round.  One of the most amazing moments of my life in Montréal came during the 2000 federal election campaign when I answered a knock on my door and found Gilles Duceppe, the leader of the Bloc québécois, with Amir Khadir, who was the BQ’s candidate in my riding (Khadir has since gone on to be the co-leader of the sovereigntist provincial party, Québec solidaire, and is currently the MNA for the Montréal riding of Mercier).  Duceppe, Khadir, and I spent a good 15-20 minutes talking about place, identity, and belonging in Québec.  Largely in English.  Even the leader of a separatist party and the candidate for my riding didn’t dispute my bona fides as a Montrealer and a Quebecer (maybe, in part, because I assured them the BQ had my vote).

Since 2006, I have spent a lot of time in New England, before moving here in 2012, on account of my wife being American.  She lived in Western Massachusetts when we met, so we did our best to split our time between Montréal and Western Mass.  After all those years spending time out there, I came to feel like it was Home.  Sure, I was never going to fully fit in, be a part of the scenery, but that was ok by me.  And, even now, living at the other end of the Commonwealth, in the massive urban sprawl that is Boston, I feel similarly at home.  The ways I feel alienated here are mostly due being Canadian.  But I don’t find myself feeling excluded by New Englanders, or, really, Americans as a whole. In other words, I can deal with my alienation, it has kind of become my default way of being.

No doubt this is due to being an Anglo Montrealer and experiencing some degree of discomfort and alienation my entire life in my hometown and anywhere else I lived in Canada, tainted as I was, so to speak, by being from Montréal.

You are currently browsing entries tagged with alienation at Matthew Barlow.