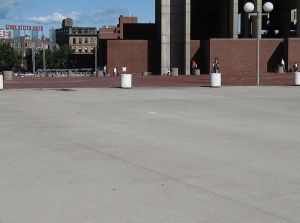 As regular readers of this blog know, I am interested in urban redevelopment, especially when it comes to questions of doing it right and doing it wrong (and chances at redemption).  For the most part, the wave of urban redevelopment that hit North American cities in the 70s and 80s was the wrong way, in that it left us with neo-brutalist architecture in the midst of our cities that is cold, uninviting and intimidating.  A case in point of this would be City Hall Plaza in Boston.  It’s a desolate, soulless urban square that people use for one of three purposes: 1) official events, because they have no choice; 2) to sit on the fringes of to eat lunch; 3) to get to the Government Center T station.  Many cities have this problem today, these horrid, horrid neo-brutalist buildings.  In some places, like Boston, it doesn’t so much matter, because the downtown core of the city is bustling, Government Center lies between Faneuil Hall/Quincy Market and the stately Boston Common.  Government Center is the site of, well, government in Boston and so this site is full of civil servants, but also tourists and Bostonians crossing between the tourist centres, the North End, and the downtown core of the city.  In other places, like nearby Worcester, this 70s/80s wave of urban redevelopment led to a massive #fail.

But, the legacy of deindustrialisation is also very real, especially in small formerly urban centres, like Worcester, but also Springfield, Mass.  Springfield is about 100 miles west of Boston and it feels about as faraway from Boston as one can get.  Springfield is a depressed, sad little city.  It has a high crime rate, nearly double that for the rest of the Commonwealth, including Boston.  It’s murder rate, .13 per thousand, is almost triple the national average (perhaps unironically, Smith & Wesson’s corporate headquarters are in Springfield). The same is true for robbery and assault.  Its property crime rates are also well above the national average.

It wasn’t always like this for Springfield.  Until the 1960s, it was a bucolic industrial city, surrounded by natural beauty.  It had a low crime and unemployment.  It was the very first Springfield in the USA, and was the birthplace of basketball.  Indian Motorcycles were from Springfield.  So was Charles Goodyear.  Merriam-Webster’s first dictionary was published there in 1805.

I-91, downtown Springfield and the Basketball Hall of Fame

Springfield experienced decline due to a combination of deindustrialisation, the closing of the Springfield Armory in 1969 (the target of Daniel Shays and his rebels in 1786), and poor urban development decisions (most notably the running of I-91 through the downtown core and cutting off downtown from the waterfront of the Connecticut River.  Various attempts to redevelop the city have failed miserably (like the basketball Hall of Fame).  And recently, the city decided that it was going to open a massive urban casino to flag the failing fortunes of Springfield.  Why they thought this would work is beyond me.  Certainly, people will now come to Springfield to shop and gamble.  But, the casino will also siphon off jobs and hurt what business still exists in the downtown core.  And now, even that appears to be at risk.

You are currently browsing entries tagged with springfield at Matthew Barlow.