Earlier this month, the algorithm developed by Dr. Katie Bouman, who was a Harvard post-doc and is incoming Assistant Professor at California Institute of Technology, helped to verify a supermassive black hole inside a distant galaxy. The photograph of her when this image, the first of a black hole, was processed, went viral.

Bouman acknowledged that the work was the result of a team effort, making it clear that this wasn’t only her accomplishment, on Facebook.

And then the belittling of Dr. Bouman began.  On-line trolls, who can’t seem to believe a woman could do this, attacked her.  It got so bad that even FoxNews noted this ridiculousness.

But perhaps even worse, the centre and left attempted to celebrate Dr. Bouman’s accomplishment, but did so in a belittling, embarrassing manner.  I saw tweets referring to her as ‘a little girl.’  Others commented on her looks.  But, perhaps the worst was from Occupy Democrats, a Facebook group.  Occupy Democrats were attempting to give Bouman credit, but, oy vey, did it fall short of the mark.

This is a textbook example of how women are belittled.  First, she is DR. Katie Bouman. Second, she is a young woman, not a ‘young lady.’  I don’t think it’s necessary to get into the issues with the term ‘lady’ here.  She was indeed a grad student three years ago, but she was then a Harvard postdoc and now she is incoming Assistant Professor at Cal Tech.  She also did not single-handedly pull this off, something she was very quick to acknowledge, as noted above.  Finally, ‘Good job, Katie!’  Come on, man!  Good job, Dr. Bouman.

Thankfully, someone has addressed this, fixing up Occupy Democrats’ meme. 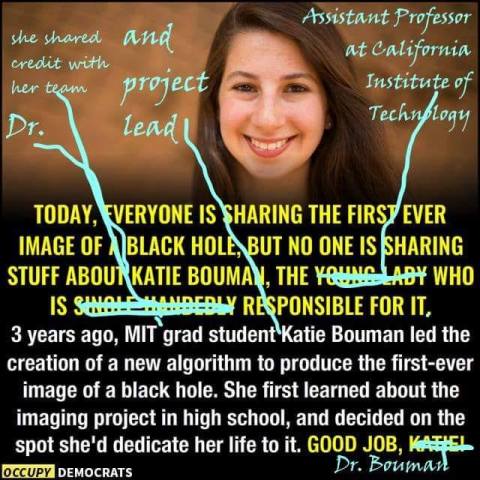 But, you see, this is nothing new.  I have been teaching at the college and university level now for over two decades.  I am married to an academic.  I cannot tell you how often I have seen this kind of thing, the belittling of women.

Ultimately, what the misogynist internet trolls and what Occupy Democrats did is infuriating.  And yet, oh so not surprising.  We need a better world.

You are currently browsing entries tagged with trolls at Matthew Barlow.