There is a meme going around the interwebs in the wake of last Thursday’s Brexit referendum and decision.  This meme is American and has appeared on the FB and Twitter feeds of pretty much every conservative I know.  And, like nearly all memes, it is stupid. And ahistorical. 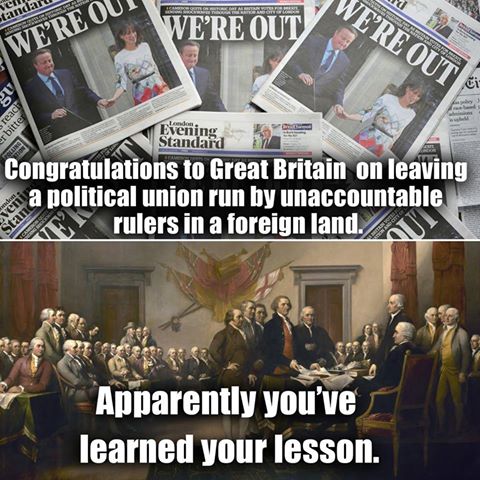 I watched an argument unfold on a friend’s FB wall over the weekend, where one of the discussants, in response of someone trying to historicize and contextualize the EU, said that “History is irrelevant.” He also noted that history is just used to scare people.  OK, then.

But this is where history does matter.  The European Union is a lot of things, but it is not “a political union run by unaccountable rulers in a foreign land.”  Rather, the EU is a democracy. All the member states joined willingly.  There is a European Parliament in Brussels to which member states elect members directly.  Leadership of the EU rotates around the member states.

And, the 13 Colonies, which rose up against the British Empire in 1774, leading to the creation of the United States following the War of Independence, were just that: colonies.  The United Kingdom is not and was not a colony of Europe.

The two situations are not analogous. At all.  In other words, this is just another stupid meme.  #FAIL

You are currently browsing entries tagged with ushistory at Matthew Barlow.