The Mormons and the Great Salt Lake

I’m in Salt Lake City, Utah, this week.  This is the second time in two years I’ve been in the area.  Last year on our cross-continental road trip, we passed through on our way from Idaho to Moab, Utah.  We did, however, stop at Antelope Island State Park, just north of Salt Lake City, in Davis County.  Antelope is on the Great Salt Lake.  It was one of my favourite stops on the trip.

As I write this, I am looking out my hotel window, on the 12th floor, at the mountains to the north of downtown Salt Lake.  As I’m sure everyone saw back during the 2002 Winter Olympics, this city is surrounded by some amazing landscape.  But, last summer, standing on Antelope Island, I understood why the Mormons stopped here on their trek west. 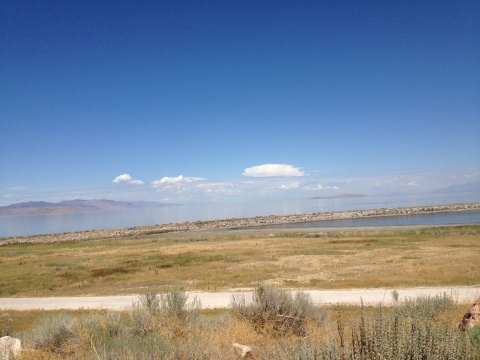 The Great Salt Lake is an amazing thing.  It’s the largest salt lake in the western hemisphere, covering some 1,700 square miles.  And it is almost spectral, with its lunar sheen to it.  What amazed me on Antelope Island was watching a series of birds come to land on the lake.  They just slid into place, there was no ripple effect, no wave action.  People call the Great Salt Lake “America’s Dead Sea.” That’s completely wrong, but that’s beside the point.  As I stood on Antelope Island, I looked at the desert landscape around me, I couldn’t see Salt Lake City or any other human settlement (though the park isn’t actually that far from suburbia), just the mountains around me, the desert, and the lake.  And I thought, it kind of looks like the Holy Lands, or at least how I imagine the Holy Lands look.  And, so, no kidding the Mormons stopped here to set up shop.

You are currently reading The Mormons and the Great Salt Lake at Matthew Barlow.