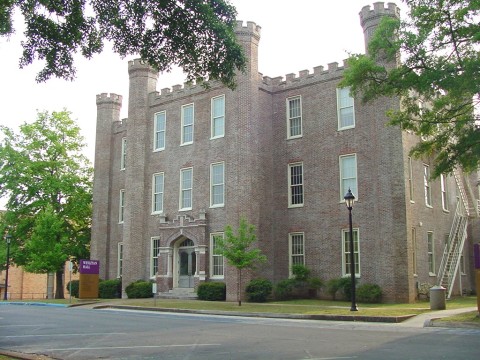 This is Wesleyan Hall on the campus of the University of North Alabama.  It is the oldest building on campus, dating back to 1855.  Florence, the town in which the university is located, was over-run by both Union and Confederate troops during the Civil War.  Parts of northern Alabama were actually pro-Union during the war and at least one town held a vote on seceding from the Confederate States of America.  This was made all the more complicated by the fact that the CSA was actually created in Montgomery, Alabama’s capital, and the first capital of the CSA, before it moved to Richmond, Virginia.

Wesleyan allegedly is still marked by the war, with burn marks in the basement from when Confederate troops attempted to burn it down in 1864.  A local told me this weekend that there is allegedly a tunnel out of the basement of Wesleyan that used to run down to the Tennessee River some 2 miles away.

Personally, I think Sherman said “war is hell” multiple times over the course of the Civil War, and why wouldn’t he?  From what I know of war, from literature, history, and friends who have seen action, war is indeed hell.  But I am less interested in where he coined the phrase than I am in the multiple locales he may or may not have done so.  What matters to me is not the veracity of the claim, but the reasons for the claim.

So why would people in at least 19 different locations claim that Sherman coined the phrase at that location?  This, to me, seems pretty clear. It’s a means of connecting a location to a famous event, to a famous man, to raise a relatively obscure location (like, say, Florence, Alabama) to a larger scale, onto a larger stage.  It ties the University of North Alabama to the Civil War.  But more than that, since we already know the then LaGrange College was affected by the war, but the attempt to claim Sherman’s most famous utterance creates both fame for the university, and makes the claim that something significant connected to the war occurred on the campus.  There are no major battlefields in the immediate vicinity of northern Alabama, so, failing that, we can claim Sherman declared that ‘war is hell’ in Wesleyan Hall.

You are currently reading “War is Hell”: Public History? at Matthew Barlow.