Historians tend to take the long view of everything.  We tend not to be make rash judgements of the world.  We are just trained not to.  And so, of late, I have been thinking of the longue durée of government and society.  One of the truisms of history is that the government really has no bearing on the lives of the majority of any given state.  Kings, queens, presidents, dictators, and prime ministers have come and gone and for the overwhelming majority of society, life carried on.

Sometimes the government’s policies came home, such as when a village’s young men marched off to war.  Or a particularly oppressive government came to power and instituted surveillance.  But even then, whether in medieval France or Ancient China, or Nazi Germany, for most people, the sun still came up, the fields still got tended, the factories still produced.

But all the while, something arose from Enlightenment thought.  And this was the idea of the rationalization of government.  By this, I mean the standardization of government and the state, and its attempts to impose itself in the lives of its citizens/subjects.  Quite often, the growth of the state was met with resistance.  In the early 1850s in rural Quebec, the guerre des éteignoirs broke out against the attempts of the Canadian government to impose a standardized, compulsory education on the children of the country.  To call it a ‘war’ is a misnomer, it was a collection of violent acts of resistance.  Still, it was a very dogged resistance.  Yet, it was ultimately fruitless.  State-sponsored education had arrived.

The mid-19th century was a period of massive state growth in Canada and the United States.  Both nations got the idea from the British, where the growth of the state and government surveillance may have staved off the spread of the French Revolution to the British Isles.  In the United States, of course, this process was both interrupted and sped up by the Civil War, as the federal state grew exponentially during the conflict, and has only continued to grow since.

This mid-19th century state building occurred through the imposition of the state into communities, through the construction of courthouses, post offices, and the like.  And the buildings followed a standardized form, designed by the same architects.  The Catholic Church had already figured out the value of standard design by this point, the state was a bit of a latecomer.  But the effects were the same.  Newly designed and constructed courthouses brought the state into a community.  The uniformity of the buildings from one town to a next reinforced the impartial eye of the state.  Back at the centre, the state also underwent tremendous growth, as new departments were created and new bureaucrats appointed to oversee this growth.

The process of the expanding state picked up from there, to the point now where it is nigh-on impossible to escape it.  It is in our wallets in the form of our driver’s licenses and our Social Insurance/National Insurance/Social Security cards (to use the Canadian/British/American terms).  It is on our cars as license plates and in the dashboard as registrations.  It knows where we live.  It knows where we work.  It knows how much we work and how much we make.  It knows intimate details of our lives.

You can see the effects of this and the various periods of state growth in any mid-size town to large city.  For example, post offices tend to look the same, built either in the late 19th century or the mid-20th.  Courthouses follow a similar plan, whether built in the late 19th century, the early 20th, or the late 20th, though they follow different plans based on era. 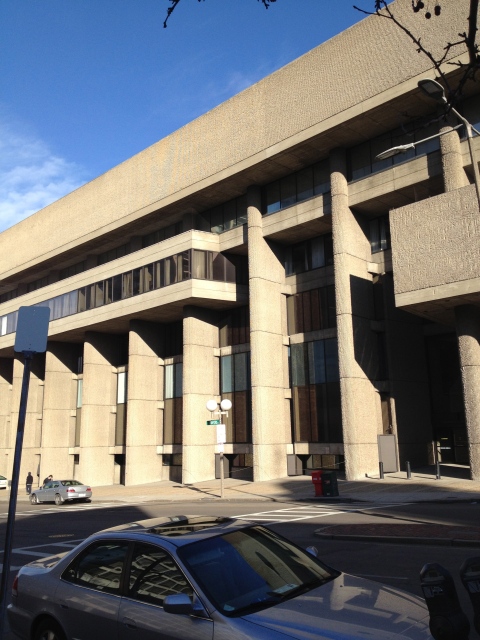 The same sort of neo-brutalism exists very far away from Boston, in a different country.  Winnipeg, Manitoba’s city hall is also a neo-brutalist construction.  And this architectural style is repeated for government buildings (and university campuses) in nearly every city I can think of in North America.  The style is immediately recognizable as the state, whether it’s Winnipeg’s City Hall or the campus of the University of Massachusetts — Amherst.  We see this style of architecture and we instantly know its purpose. 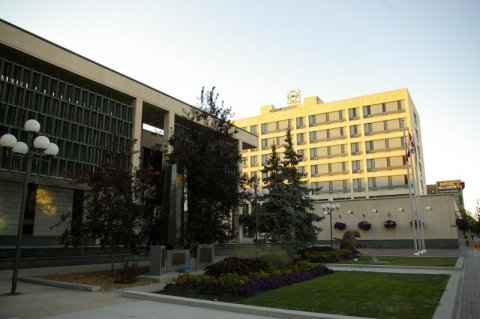 These buildings are designed to be immovable and permanent, to show us the permanence of the state, and the implied power behind it.  These are overwhelming buildings.  Standing in Government Center, Boston, or Nathan Philips Square, Toronto, is an exercise of feeling one’s insignificance in the face of the state.  When I went for my interview to receive my Green Card at Government Center, I thought about this, how insignificant my individual power was in the face of the state.  Whether we think about this implicitly or explicitly, it is there.  And that is the point (just as Edwardian era bank buildings make their point)

So we are left to believe that the state is unmoving and immovable.  And so it is.  But, something else has happened in the wake of this massive growth of the state, as it has invaded our wallets, our dashboards, and more.  The power of the state has continued to grow, its presence in our lives in inescapable.

And thus, now, when government changes hands through the democratic process and a new one takes control, whether it is in Olympia, the capital of Washington state, or Halifax, the capital of Nova Scotia, or Washington, DC, or Ottawa, there is a very real possibility that it will change the lives of the people of that state/province/nation.  Major governmental policy shifts on everything from foreign affairs to net neutrality to consumer protection laws to immigration laws impacts nearly everyone.

And this is something to think about as we enter the era of the Trump Administration in the US.

You are currently reading Governmental Power at Matthew Barlow.