As regular readers will know, I have been working on the history and memory of Griffintown, Montreal for many years now.  My book, Griffintown: Identity and Memory in an Irish Diaspora Neighbourhood, is out in May (the paperback will be out in the fall).  And, of course, I have been working for a few years now with Montreal film-maker, artist, animator, and purveyor of all things creative, G. Scott MacLeod.  Our project, 21 Short Films About Griffintown, is now up on the web for all to see.

This project is based on a walking tour of Griff Scott developed, and can be followed on your smart phone.  We have 21 very short films of 21 sites around Griff, about their history and significance.

I like these clips, partly because Scott has done some great work contextualizing my stories of these sites with archival footage, his animations, and music, because all of this also minimizes my screen time.  But also because it was a fun day that we spent wandering around Griff filming these.  It was a hot August day in 2012, a day or two before I left Montreal for good.  I had my dog, Boo, with me.  He was all stressed out because of the move and had scratched his face raw.  So he was with me because I had to keep him from scratching the infection.  He trundled along with us in the 30C heat, usually with my foot on his leash as we filmed.  Boo was a massive dog, around 150lbs, a Mastiff/Shepherd cross.  He was a big, gentle giant. Boo died last year, so I see this project as a bit of a memorial to him, even if he doesn’t appear on screen. 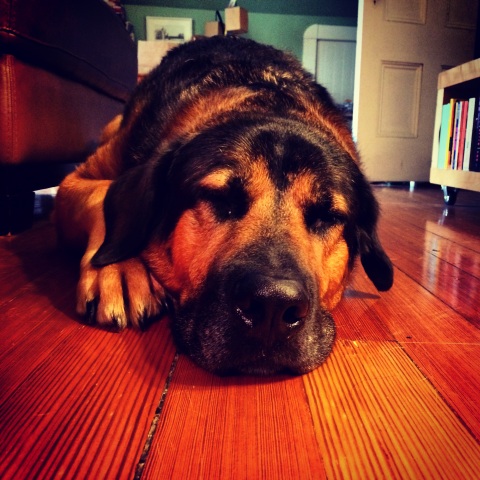 You are currently reading 21 Short Films About Griffintown at Matthew Barlow.