I’m reading Viet Thanh Nguyen’s Nothing Ever Dies: Vietnam and the Memory of War.  It’s an interesting read, as it posits the larger history of the Vietnam War, which includes the Vietnamese, as well as Laotians and Cambodians, are an essential part of the war story.  Of course, that is bloody obvious.  But, he is also right to note their elision from the official story of the Vietnam War in the US.  He also objects to the fact that the very word ‘Vietnam’ in the United States means the Vietnam War.  The entire history and experience of a sovereign nation is reduced to a nasty American war.

He spends a lot of time talking about the ethics of memory and an ethical memory in the case of the Vietnam War.  And he is sharply critical of the Vietnam Veterans’ Memorial in DC.  He is critical because, as he notes, the memorial is 150 feet long and includes the name of the 58,195 Americans who died in service; if it were to include the Vietnamese dead, the wall would be nine miles long.

And so this brings up an interesting point about monuments and memory.  There is a lot more to be said about this topic and, time permitting, I will return to this point in future posts.  But what I want to consider here is the very nature of memorials.  Memorials are either triumphalist or they are commemorative.  They are constructed to recall glorious memories in our past. Or they are constructed to recall horrible events in our past. 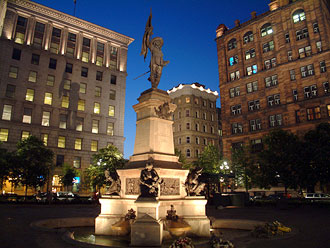 In the former category, we have one of my favourite monuments, that to Paul de Chomedy, Sieur de Maisonneuve, and the other founders of Montreal.  This is a triumphalist monument, with Maisonneuve surveying Place d’Armes from atop the monument, ringed with other early pioneers of Montreal: Lambert Closse, Charles le Moyne, and Jeanne Mance.  And then, of course, there’s Iroquois, the single, idealized indigenous man.  In the bas-relief between the four minor statues, the story of the founding of Montreal is told, sometimes with brutal honesty, such as the ‘Exploit de la Place D’Armes,’ which shows Maisonneueve with his gun to the throat of an indigenous warrior, as other warriors watch horrified. 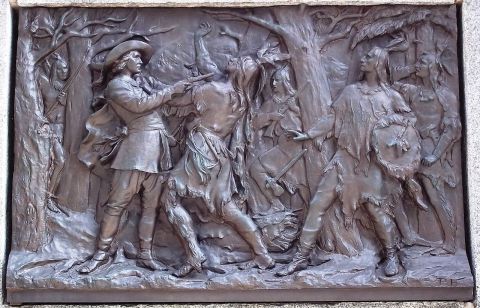 The Maisonneuve monument was erected at Place d’Armes on 1 July 1895, Canada Day (or Dominion Day, as it was known then).  Montreal had celebrated its 250th anniversary in 1892, and this monument was a product of that celebration. 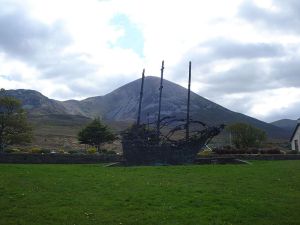 An example of a commemorative monument is the National Famine Monument, at Murrisk, Westport, Co. Mayo, Ireland. This monument was unveiled in 1997, on the 150th anniversary of Black ’47, the worst year of the Irish Famine (1845-52).  The Famine saw close to half of Ireland either die (1 million) or emigrate (2 million).  It is the birth of the great Irish diaspora, and remains one of the most catastrophic moments in the history of Ireland.  The monument is stark, and looks frankly out of place, as a bronze model of a coffin ship sits in the green fields of Mayo.  But it is designed to be haunting, a testament to the victims of the horrors of the Famine.

But what Nguyen is arguing for is an inclusive monument-making: one that honours both sides of an historical event.  And so I find myself wondering what that would even look like, how it would be constructed, how it would represent both (or more) sides of an historical event.  How would the historic interpretive narrative be written? What kind of language would be chosen?  Monuments are already an elision of history, offering a sanitized version of history, even commemorative ones (such as the one in Co. Mayo, which most clearly does not discuss the policies of British imperialism in manufacturing a Famine in Ireland).  So how is that historical narrative opened to include multiple points of view?

I don’t have the answers, but these are questions worth pondering.

You are currently reading Monumental History at Matthew Barlow.