‘Everyone is a literalist when it comes to photographs,’ Susan Sontag wrote in Regarding the Pain of Others.  She has a point, sort of.  We expect photographs to represent reality back to us.  But they don’t, of course, or they don’t necessarily.  For example, she discusses an exhibit of photographs of September 11, 2001, that opened in Manhattan in late September of that year, Here is New York.  The exhibit was a wall of photographs showing the atrocity of that day.  The organizers received thousands of submissions, and at least one photo from each was included.  Visitors could chose and purchase a laser printed version of a photo, but only then did they learn whether it was a photo from a professional or an amateur hanging out their window as the atrocity occurred.  Sontag talks about the fact that none of these photos required captions, the visitors will have known exactly what they depicted.  But she also notes that one day, the photos will require captions.  Because the cultural knowledge of that morning will disappear.  9/11 is already a historical event for today’s young adults.

So we return to the veracity of photos, our expectation of a documentary image of the past.  For me, the first time I was seriously arrested by a photograph was in my Grade 12 history textbook, in the section on the Second World War.  There was a photograph of an American soldier lying dead on a beach somewhere in the Pacific.  I don’t remember where or which battle.  I don’t remember the image all that well, actually, I don’t think the viewer could see the soldier’s face.  I remember just a crumpled body, in black and white.  And for the first time, I understood the devastating power of war and the fragility of the human body.

Later, in grad school, I read Ian McKay’s The Quest of the Folk, about how Nova Scotia’s Scottish history was carefully constructed and curated by folklorists at the turn of the 20th century. At the start of the book is a photograph of a family next to their cottage on a hard scrabble stretch of land on the Cape Breton coast.  McKay plays around with captions of the photo, both the official one in the Nova Scotia archives in Halifax, and alternative ones.  I realized that photographs are not really necessarily a true and authentic vision of the past.

And so, in reading Sontag’s words I opened this essay with, I thought of the fact that we do like to think of ourselves as literalists when it comes to photography, we expect a ‘picture to say a thousand words,’ and so on.  Just prior to this comment, Sontag discussed Francisco Goya’s Disasters of War, a series of plates that weren’t published until several decades after Goya’s death.  The disasters were the Napoléonic invasion of the Iberian Peninsula in 1808.  These plates are vicious.  And Goya narrates each, claiming each one is worse than the other, and so on.  He also claims that this is the truth, he saw it.  Of course, they aren’t the documentary truth, they instead represent the kinds of events that happened.  That does not, however, lessen their power and brutality. But they are also not photographs.

This led me to Alexander Gardner, the pre-eminint photographer of the US Civil War.  In fact, war photography in general owes a huge debt to Gardner.  Gardner worked for the more famous Mathew B. Brady, but it was Gardner who took the majority of the more famous photographer’s photos.  Gardner shot some of the most iconic images of the Civil War, including the dead at Gettysburg.  His most famous is this one: 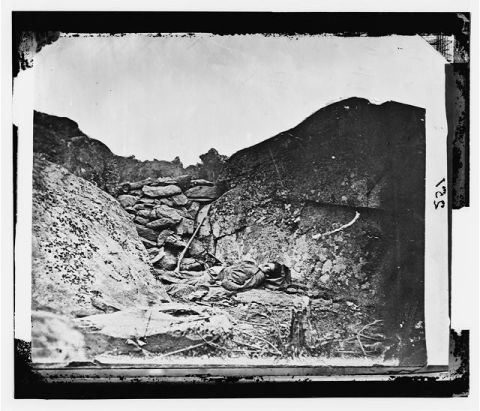 This photograph is staged.  Gardner and his assistants dragged the body of this dead Confederate soldier from where he fell to this more photogenic locale.  They also staged his body.  And yet, given our insistence on literalism in photography, the viewing public took this photo for what it’s worth and accepted it as a literal representation of the Battle of Gettysburg.

It was over 100 years later, in 1975, when a historian, Willian Frassantino, realized that all was not as it seems.  Of course, what Gardner, et al. did in staging the photos of the Civil War seems abhorrent to us, unethical, even.  But it was not so in the mid-19th century at the literal birth of this new medium of representation.

Nonetheless, what is the lesson from Gardner’s photograph?  Do we dismiss it for its staginess?  Do we thus conclude that the photos of the Civil War are fake?  Of course not. Gardner’s photos, like Goya’s Disasters of War, are representations of what happened.  They are signifiers that things like this happened (I am paraphrasing Sontag here).  It does not make these representations any less valuable.  Young men did die by the thousands in the Civil War.  They died at places like Gettysburg, and they died like the staged body of this unfortunate soul.  The horrors of war remain intact in our minds.  We have a representation of what happened, and this one in particular (like Goya’s Disasters) has been replicated countless times since 1863, we have seen countless other images like this, including for me, the one in my Grade 12 history textbook when I was all of 17 years of age.  The image is still real.

You are currently reading Staging the Civil War at Matthew Barlow.