I’m reading a book that is, for the lack of a better term, a biography of the Kremlin.  I am at the part where the Kremlin, and Moscow itself, gets rebuilt after Napoléon’s attempt at conquering Russia.  Moscow had been, until it was torched during the French occupation, a haphazard city; visitors complained it was Medieval and dirty. And it smelled.  And not just visitors from Paris and Florence, but from St. Petersburg, too.

In the aftermath, Moscow was rebuilt along Western European lines, in a rational manner.  And the city gentrified, the Kremlin especially:

This was definitely a landscape that belonged to the rich and the educated, to noblemen and ladies of the better sort.  It is through the artists’ eyes that we glimpse the well-dressed crowds: the gentlemen with their top hats and shiny canes, the ladies in their bonnets, gloves, and crinolines.  They could be leading citizens of any European state, and there is little sense of Russia (let alone romantic Muscovy) in their world.

Leaving aside the fact that there were no citizens of any European state in 1814, this sounds remarkably familiar.  This is the same critique I have written many times about Griffintown and Montreal: as Montreal gentrifies, it is becoming much like any other major North American city.

But it is also true of gentrification in general.  There is a part on the North Shore of Chattanooga, Tennessee, I really like.  It finally dawned on me that it is because it reminds of me Vancouver architecturally, culturally, aesthetically, and in the ways in which the water (in this case the Tennessee River, not False Creek) is used by the redevelopment of this historically downtrodden neighbourhood.  But.  I could also be dropped into pretty much any North American city and see similarities: Toronto, Vancouver, Montreal, New York, Boston, Seattle, Portland (Oregon), Cincinnati, Cleveland, Buffalo, Chicago, Atlanta, Nashville.  These are all cities (amongst others) where I have seen the same tendencies.

And, obviously, one aspect of gentrification is the cleansing of the city of danger and vice.  Just like Moscow was cleaned up in the aftermath of 1812.

The Death and Life of Griffintown

I was back in Montreal a couple of weeks ago to finish up shooting for the documentary my good friend, G. Scott MacLeod, and I have been working on for the past few years.  We travelled around Griffintown, doing some B shots, and re-doing some other shots.  And then we found ourselves at Parc Faubourg Sainte-Anne, on the site of the former St. Ann’s Church at the corner of de la Montagne and Basin.  Across the street is one of the last remaining stands of 19th century rowhouses in Griff.  And right behind and beside it is yet another condo development (because there never can be enough, right?).

Part of these rowhouses were part of a co-op. One Friday afternoon in April, a bunch of men in suits and hardhats showed up, milled around, pointed at things, and then disappeared.  Later that night, the residents of the co-op were forced out of their homes.  Their homes were quickly condemned and they weren’t even allowed to go back in to get their personal belongings (the fire department had to go back in to get the ashes of one woman’s husband).  Why did this happen?  Well, it seems that a water line had been opened and that had compromised the foundation of the 1867 building.

That Sunday night, around 10.30pm, a huge backhoe showed up and tore down the end unit of the co-op, the one with the leaky foundation.  The residents were “temporarily” re-housed.

Today, the co-op units are empty, only three of them still stand. And they all have a notice of eviction on their front doors. 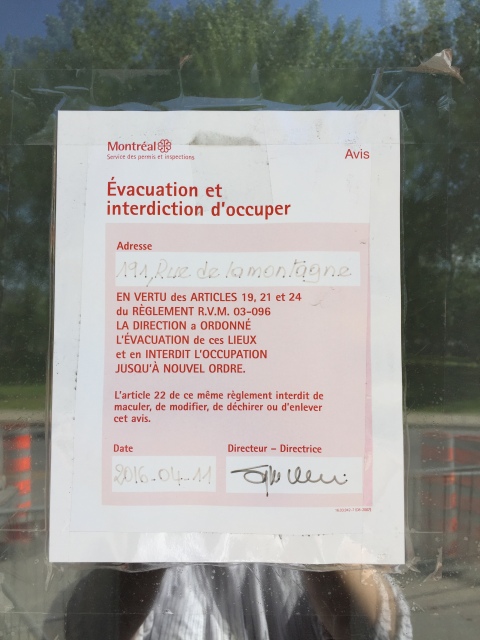 As we were filming, we were approached by a Griffintown old-timer.  He doesn’t want his name used, so he will go unnamed.  He showed us a bunch of photos on his cellphone of the suits and the backhoe.  And he told us what he saw happen.  He said that a retaining wall had been built behind the co-op units when excavation work began on the condos around it.  But, interestingly, the wall behind the fourth unit of the co-op had somehow disappeared the week before the water leak.  And, just as amazingly, it suddenly re-appeared after the fourth unit was torn down.  As to who turned on the water, well, he left that to our imagination.

Whether or not his version of events is true or not, to me, this is symptomatic of the new Griffintown, one that is beholden to condo developers and the accumulation of tax money for the Ville de Montréal.  We all know Montreal is a historically corrupt city, and the recent Charbonneau Commission detailed corruption in the Montreal construction industry.

And whether or not something fishy happened with respect to the co-op or not, the events of April do not pass the smell test.  That no one seems to care is even more worrisome.  Montreal is a wonderfully progressive city in so many ways, but Griffintown is a fine example of what happens when greed takes over.  The city had this wonderful opportunity to remake an entire inner-city neighbourhood.  And rather than engage in sustainable development, or even, for that matter, a liveable area, the Ville de Montréal took the money and ran.  And this is to the city’s detriment.

Oh, and the residents of this co-op? Call me cynical, but I’ll be shocked if they end up back in their co-op.  See, the developer’s office is right next door to the co-op and my guess is that these buildings will either also mysteriously fall down or become condos as part of this larger development.

When we lived in Pointe-Saint-Charles in Montreal, we lived about two doors down from a community garden in the shadows of the massive Église Saint-Charles.  That community garden had been there as long as I could remember, it pre-dated my first residence in the Pointe back in 2002-4.  The people who used it were the poor, working-class and marginalised Irish and French Canadians who lived in the Pointe. But, by about 2009 or 2010, the garden had been taken over by the gentrifiers, forcing out the old school urban harvesters.  Many of these gentrifiers thought they were new and unique in gardening in an inner-city neighbourhood.  Indeed, this is something I saw over and over again in Montreal, on the Plateau, Saint-Henri, the Pointe, and other neighbourhoods, as hipsters discovered the benefits of community gardens.

But they were hardly new ideas in old working-class neighbourhoods, particularly in the Pointe.  The Pointe had long had community gardens.  Aside from this one in on the rue Island, there was also a bigger one in the shadows of the railway viaduct along the rue Knox.  And the problems arise when the original inhabitants of the Pointe were forced out of these gardens by the gentrifiers.  The gardens were used to supplement diets, obviously.  I also noticed something else when I lived in the Pointe in the early part of the past decade and when I was in Saint-Henri mid-decade.  In both neighbourhoods, the local IGA (grocery store), both owned by the same family, the Topettas, opened new, glitzy stores.  The IGAs in the Pointe and Saint-Henri had been in grotty store fronts, on rue du Centre in the Pointe, and rue Notre-Dame in Saint-Henri.  When the new IGA opened in the Pointe c. 2002 and in Saint-Henri in 2005-6, I noticed a lot of low income families wandering around the stores with a slightly dazed look on their faces, complaining about rising prices.  This was ameliorated some by the opening of the big Super C at Atwater Market, which generally had much lower prices than either IGA.

I was thinking about all of this as I was reading an excellent article on TheGrio about food insecurity and food gentrification.  The article was written by Mikki Kendall, an African American feminists in the States, about the process of food gentrification.  Kendall writes about having grown up poor and eating the more undesirable cuts of meat, like hamhocks, neck bones, and the like.  She recalls her grandmother being an expert at turning “turning offal into delicious.”  Kendall notes the gentrification of what I call poor people’s food.  As haute cuisine chefs re-discover these traditionally less desirable foods and turn them into fancy dishes for the wealthy, it drives up the prices of these cuts.

[As an aside, I can’t help but wonder if the joke is ultimately on the wealthy eating these cuts of meat at expensive restaurants and I think of Timothy Taylor’s brilliant début novel, Stanley Park, which recounts, in part, the story of Jeremy Papier, a chef and restaurauteur in Vancouver.  Papier favours local ingredients and culture and comes to rely on animals trapped in Stanley Park for his fancy restaurant on the border of the Downtown Eastside, the poorest urban neighbourhood in Canada.]

But to return to Kendall and the IGA and community gardens in Pointe-Saint-Charles: Kendall notes that with the rising cost of these traditional cuts of meat used by the poor comes an inability to purchase them:

Yet, as consumers range further and further afield from their traditional diets, each new “discovery” comes at the expense of another marginalized community. Complaints about the problem are often met with, “Well, eat something else that you can afford” as though the poor have a wealth of options, and are immune to dietary restrictions based on religion, allergies, access, or storage capabilities.

So, ultimately, the poor are left to eat processed food, which isn’t good for any of us.  That is the only thing that is easily accessible.  When I was student, I noted with deep and bitter irony that the cheapest meal option was often McDonalds.  Or, if I went to the grocery store, aside from Ramen noodles (a processed food I cannot stand), the cheapest option was Kraft Dinner (or Mac & Cheese for you Americans), another slightly vile processed food (full confession: KD remains my comfort food of choice, I import large quantities of it from Canada).

And the end result of all of this bad, processed food is the toll it takes on the health of the poor, both in urban centres and rural areas.  In the United States, African Americans are, on the whole, poorer than everyone else.  In Canada, it is the aboriginals.  It is no coincidence that food insecurity hits African Americans in the US hard.  It is also no coincidence that rates of heart disease, hyper-tension, diabetes, and obesity are much higher in African American and Canadian aboriginal communities than in the rest of both nations.

We can and must do better.

You are currently browsing entries tagged with inner cities at Matthew Barlow.