The Death and Life of Griffintown

I was back in Montreal a couple of weeks ago to finish up shooting for the documentary my good friend, G. Scott MacLeod, and I have been working on for the past few years.  We travelled around Griffintown, doing some B shots, and re-doing some other shots.  And then we found ourselves at Parc Faubourg Sainte-Anne, on the site of the former St. Ann’s Church at the corner of de la Montagne and Basin.  Across the street is one of the last remaining stands of 19th century rowhouses in Griff.  And right behind and beside it is yet another condo development (because there never can be enough, right?).

Part of these rowhouses were part of a co-op. One Friday afternoon in April, a bunch of men in suits and hardhats showed up, milled around, pointed at things, and then disappeared.  Later that night, the residents of the co-op were forced out of their homes.  Their homes were quickly condemned and they weren’t even allowed to go back in to get their personal belongings (the fire department had to go back in to get the ashes of one woman’s husband).  Why did this happen?  Well, it seems that a water line had been opened and that had compromised the foundation of the 1867 building. 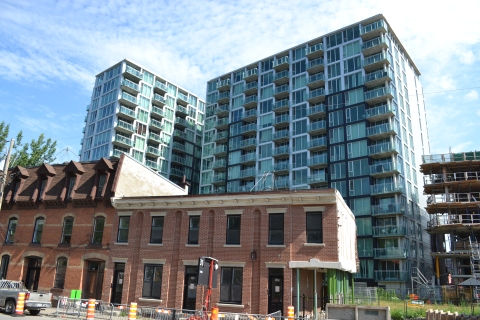 That Sunday night, around 10.30pm, a huge backhoe showed up and tore down the end unit of the co-op, the one with the leaky foundation.  The residents were “temporarily” re-housed.

Today, the co-op units are empty, only three of them still stand. And they all have a notice of eviction on their front doors.

As we were filming, we were approached by a Griffintown old-timer.  He doesn’t want his name used, so he will go unnamed.  He showed us a bunch of photos on his cellphone of the suits and the backhoe.  And he told us what he saw happen.  He said that a retaining wall had been built behind the co-op units when excavation work began on the condos around it.  But, interestingly, the wall behind the fourth unit of the co-op had somehow disappeared the week before the water leak.  And, just as amazingly, it suddenly re-appeared after the fourth unit was torn down.  As to who turned on the water, well, he left that to our imagination.

Whether or not his version of events is true or not, to me, this is symptomatic of the new Griffintown, one that is beholden to condo developers and the accumulation of tax money for the Ville de Montréal.  We all know Montreal is a historically corrupt city, and the recent Charbonneau Commission detailed corruption in the Montreal construction industry.

And whether or not something fishy happened with respect to the co-op or not, the events of April do not pass the smell test.  That no one seems to care is even more worrisome.  Montreal is a wonderfully progressive city in so many ways, but Griffintown is a fine example of what happens when greed takes over.  The city had this wonderful opportunity to remake an entire inner-city neighbourhood.  And rather than engage in sustainable development, or even, for that matter, a liveable area, the Ville de Montréal took the money and ran.  And this is to the city’s detriment.

Oh, and the residents of this co-op? Call me cynical, but I’ll be shocked if they end up back in their co-op.  See, the developer’s office is right next door to the co-op and my guess is that these buildings will either also mysteriously fall down or become condos as part of this larger development.

§ 2 Responses to The Death and Life of Griffintown

You are currently reading The Death and Life of Griffintown at Matthew Barlow.