Pointe-Saint-Charles has historically been an inner-city working-class neighbourhood. And a forgotten one, hemmed in by the industrial nature of the Lachine Canal and the Canadian National Railway tracks and train yards. The inhabitants toiled away for long hours for low wages, often without security of tenure at work. And then deindustrialisation hit the Pointe hard in the 70s and 80s. Suddenly, all the people who worked long hours for low wages couldn’t work anymore for any wages. And the Pointe’s unemployment rate shot up, reaching something like 33% by 1990.  Even today, with creeping gentrification, the Pointe still has shocking pockets of poverty, high unemployment, and high reliance on social services.  Each week, the food bank at St. Gabriel’s Church across the street from my flat has a long line outside it. The Mission du Grand Berger on rue Centre and the charity shop in the back of the towering Église Saint-Charles are going concerns. As is the pawn shop and the dollar stores on Centre. Wellington, the former commercial hub of the Pointe, looks like a ghost town.

In short, the Pointe is a classic, inner-city, downtrodden neighbourhood. And yet, it has one of the strongest senses of community I have ever seen in a city. And it is an inclusive community, one that welcomes all: French, English, working class, yuppies, immigrants. The lingering tension that hangs over the sud-ouest of Montréal between French and English doesn’t exist here. The tensions surrounding gentrification is also more or less absent. The block I live on is a dividing line between the yuppies and the working classes. I live on the north side, the yuppified side. And yet, everyone is friendly.  This is seriously a place where you go into the dépanneur and end up having a 20-minute conversation with the shopkeeper and customers about the Habs. Where you know your neighbours.

The sense of community is deeply-rooted in the Pointe. One of the focal points is the Clinique communitaire de Pointe-Saint-Charles on rue Ash in the southern end of the neighbourhood.  The Clinic was founded back in 1968 when a bunch of radical medical students from McGill came down here and were appalled by what they saw in terms of public health. My favourite story involved a young girl who said that when she went to the bathroom at home, she had to pound the floor with her shoes so that the rats didn’t bite her. So they did something. They weren’t entirely welcomed by the people of the Pointe, it must be noted. Instead of picking up their marbles and going home, instead they invited the community to get involved. The Clinic was a radical organisation, grassroots in nature, and the medical staff there made the connection between poverty, ill health, and mental health. The Clinic has had a psychiatrist on staff since 1970. 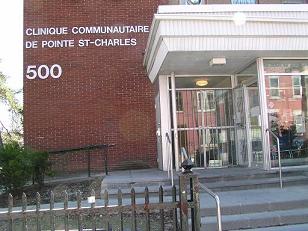 The Pointe Clinic predates Québec’s innovative CLSC (Centre local des services communitaire) system, a sort of front-line centre for health and other social services in the communities of the province. In fact, the Pointe Clinic was a model for Robert Bourassa’s Liberals when they created the CLSC system in 1974. The Pointe Clinic demanded that it’s autonomy be respected and the government left it outside of the CLSC system. Five years later, the Parti Québécois of René Lévesque was in power, and the government attempted to bring the Pointe Clinic into the CLSC system. Bad move, as the community mobilised and protested against the government’s decision. The government had no choice but to back down. Indeed, the Health Minister said: “Compte tenu de votre existence antérieure à l’implantation des CLSC, le ministère des affaires sociales a confirmé son intention de ne pas vous assimiler à ce type d’établissement mais bien de respecter la spécificité de votre organisme.”

And so the Clinic survived and thrived, as it continued to grow in terms of staff and importance in the community. Indeed, the Clinic is still run by members of the community, not the medical staff and certainly not the government. But this autonomy has not been easy to protect. Perhaps the greatest battle came in 1992, when Robert Bourassa and the Liberals were back in power. That year, the government proposed the Loi sur la santé et les services sociaux. As the Clinic explains on its website:

Bad move, government. The community of Pointe-Saint-Charles mobilised on the streets. 600 people marched to protest the government’s plan. There was street theatre and delegations to the local and provincial politicians. Half of the adult population of the Pointe signed a petition protesting the government’s plans. The government had no choice but to back down.

A final battle in the middle of the last decade saw the Clinic brought within the larger system, but at the same time maintaining its autonomy.  No one calls it the CLSC here in the Pointe. Instead, we all know it as the Clinique Communautaire de Pointe-Saint-Charles, or the Clinic.

A second branch was opened on rue Centre. One of the deepest ironies of a protest against the condofication of the neighbourhood came a couple of years ago when a condo development on Centre, next door to the CLSC went up in flames when it was still under construction. The developers returned, and rebuilt the condos. But those who suffered: the small drycleaner next door and the CLSC, which was closed for nearly a year as it attempted to recover.

The Clinic is a community centre in the Pointe, something for which the people here have every right to be proud. And because the people of the Pointe have been so successful in creating and protecting their clinic, the community here has been able to successfully protect itself from some forms of gentrification. I had the opportunity to spend a fair amount of time at the Clinic this winter due to some freaky health issues, and I was always blown away by the ways in which this community has mobilised to protect itself.

These days, the big issue is what is to become of the CNR yards at the southern end of the neighbourhood, the point for which Pointe-Saint-Charles is named. Rather than allow a bunch of condos be thrown up on the old rail yards , the Comité Action CN formed out of the Carrefour d’éducation populaire de Pointe-Saint-Charles on rue Centre to protect the community and to propose an alternative for the development of those lands. Last autumn, the Comité created a glossy publication, “Les terrains du CN de Pointe-Saint-Charles: Des proposition citoyennes.” Not wishing to be subject to expensive condos that will further alienate the residents of the neighbourhood and continue to put affordable housing out of reach, to say nothing of the pollution and noise caused by the construction condos on the site, the Comité proposes community gardens and a market, and to use the old buildings as a new community centre, as well as a housing co-operative. But before any of this happens, the Comité insists that the CN lands need to be decontaminated.

Too often I read of laments for community, or worse yet, the argument that community can only be forged by yuppies in their soul-less condos.  Clearly, the Pointe says otherwise.

§ 3 Responses to Community in Pointe-Saint-Charles

You are currently reading Community in Pointe-Saint-Charles at Matthew Barlow.