The Queen Elizabeth Hotel on blvd. René-Lévesque has fascinated me ever since I was a kid.  Structurally and aesthetically, it is one of the ugliest buildings in the downtown core of Montréal.  Built in a neo-brutalist style usually reserved for university campuses, the Queen Elizabeth is nonetheless the swishest hotel in Montréal.  It is also the largest hotel in Montréal and Québec, with over 1,000 rooms.  The other thing that has fascinated me since the mid-70s is the name of the hotel.  How does a hotel in the middle of Montréal, the metropole of Québec, end up being named after the Queen?  Better yet, what’s with the incongruity of the name in French, Le Reigne Elizabeth, with the masculine article there before the feminine monarch? 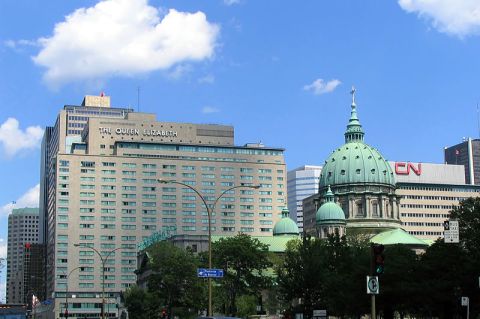 When the hotel was first proposed back in 1952, there was an upsurge of love for the monarch in English Canada.  Queen Elizabeth II had just ascended the throne, and around the former British Empire, people were gaga over the queen, somewhat like people are currently in a tizzy over the former Kate Middleton.  However, the 1950s also saw the rumblings that led to the eruption of the Quiet Revolution in Québec in 1960.  There was an upsurge of québécois nationalism in the city and province as well.  Indeed, nationalists argued that the Canadian National Railways should name the new hotel after the founder of Montréal, Paul de Chomedy, sieur de Maisonneuve.  Nonsense, responded the CNR’s president, Donald Gordon: Canada is a Commonwealth nation, and the head of the Commonwealth is Queen Elizabeth II.  Since he was the one building the hotel, he won the debate.

As for the masculine article in the hotel’s French name, well, it turns out that refers to the implied ‘hotel’ in the name, and hotel is masculine. There you have it.

The Queen Elizabeth Hotel, of course, has lived up to its reputation.  The Queen herself has rested her head on its pillows four times, and her son, Prince Charles, has also visited.  The NHL entry draft was held there pretty much every year until 1979.  But, of course, the most famous event to have occurred in the Queen Elizabeth is the “bed-in” of John Lennon and Yoko Ono, 26 May-2 June 1969.  Lennon and Ono had been denied entry to the United States, because Lennon had a cannabis conviction from 1968.  A bed-in was planned for New York City.  So now the plan had to be changed, and so Lennon and Ono bedded down in the Queen Elizabeth for their second Bed In for Peace (the first had been in Amsterdam 25-31 March).  During the Montreal bed-in, the anthem “Give Peace a Chance” was recorded by André Perry.

You are currently reading Le Reigne Elizabeth at Matthew Barlow.