I often amuse myself with the attempts of Canadian historians to try to explain how, in the years leading up to the First World War, Anglo Canadians could alternately view themselves as Canadians, English, British, and as citizens of the greatest empire the world had ever seen (that would be the British, if you’re wondering).  They tend to see this as a contradiction, a confusion, and get themselves twisted into knots in explaining this phenomenon.  It just seems so contradictory to them.  Here, for example, is Ian McKay, one of Canada’s greatest historians, with Jamie Stairs in their excellent new book, Warrior Nation: Rebranding Canada in an Age of Anxiety:

Many Anglo Canadians like [Bill Stairs, a Canadian hero of Empire] believed that a good British subject could and should simultaneously be loyal to Nova Scotia [Stairs’ home], Canada, and the Empire, and in doing so experience no contradiction.

To our 21st century Canadian identity, it is anathema that one could see oneself as more than just Canadian.  And I just don’t get this.  I really don’t.  In the late 19th/early 20th centuries, Canada was a colony.  It was not an independent nation, no matter what the politicians of the era, the Jack Granatsteins and Stephen Harper’s of today tell you.  Canadian independence is a slippery concept, there is no exact moment that Canada gained its independence.  For example, it could be 1848, when the Canadas gained responsible government.  Or it could be 1867, when three colonies came together to form a united whole (Canada, Nova Scotia, New Brunswick).  It could also be 1931, when the Statute of Westminster gave Canada (and all the other white Dominions: South Africa, Australia, and New Zealand) control over their foreign affairs.  But, there was still no such thing as “Canadian” citizenship.  That came on the 1st of January 1947.  The following year, the Supreme Court of Canada became the highest court of appeal in the land.  Prior to that, it was the Judicial Committee of the Privy Council in London (not Ontario, the UK one) that held that position.  In 1982, our constitution was patriated from Mother Britain and made an act of our own Parliament.  If you want to go all republican on the matter, I’d note that the head of state today is Queen Elizabeth II of England.  So, politically, declaring the date of Canadian independence is difficult.

But the long and short of it is that 100 years ago, Canada was not an independent nation.  It was also part of this massive Empire.  The British Empire controlled something like 20% of the world’s land and 25% of the world’s population at the dawn of the 20th century.  Think about that for a second.  I mean it, just imagine the globe, imagine 20% of that land coloured the pink of the British Empire.  Or just look at this map (and imagine the red as pink). 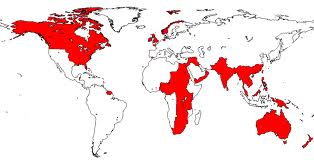 Empire was a very powerful concept in that Canada (and if Stephen Harper has his way, we’ll be thinking this way again soon).  It was not incongruous for the average Canadian of Scots, English, or even Irish, stock to see him or herself as both Canadian and British at the same time.  For being Canadian made one British, such was the nature of citizenship laws, and such was the fact that the monarch of the United Kingdom of Great Britain and Ireland was (and remains) the head of state in Canada.

Thus, the simple fact of the matter is that Canadians 100 years ago were both/and, not either/or.  They were both Canadian and British, not Canadian or British.  That was the way they rolled, so to speak.  The same was true for other subjects of the British Empire throughout the Dominions.  It might be time for Canadian historians to recognise this simple fact, and to stop twisting them like Mike Palmateer trying to bail out his woeful hockey team in trying to explain this.  Joy Parr long ago instructed we Canadian historians that identities are not sequential, they are multiple and simultaneous.  And the average Anglo Canadian’s identification with Canada, Britain, and Empire is just that: the simultaneous identities of an ambivalent population.  No more, no less.

§ 3 Responses to Canada and Empire

You are currently reading Canada and Empire at Matthew Barlow.