The Great War and Monuments in Canada

Across Canada, the cenotaph is a central component of the central square of villages, towns, and cities.  Erected in the wake of the First World War, these cenotaphs faithfully record those who gave their lives in the first global conflict.  The First World War was the ‘war to end all wars.’  While not nearly as massive or bloody as the Second World War, it is the First World War that is remembered as The Great War.

These cenotaphs recording the war dead are deeply embedded on the landscape.  And, unlike so many memorials, they are not invisible.  Growing up, I was always aware of them and what they meant.  They were solemn and dignified, almost always identical, obelisk shapes.  I remember reading the names of the dead on them, and not just on Remembrance Day.

The dead of the First World War seemed so faraway from me, growing up in the 1980s, beyond living memory for me.  My grandparents served in the Second World War.  And whilst my grandfather’s service as a tailgunner in the Royal Canadian Air Force held a certain romance, it was nothing compared to the First World War.

As a boy in Canada, I didn’t know a lot about the conditions of the War.  I learned these in university and the romance of the war dropped away quickly.  And I learned more and more about the status of Canada during this period.  Even still, the First World War has maintained a certain mystique.  Part of this is driven by the poem ‘In Flanders Fields’ by the Canadian soldier (and victim of the war) John McCrae:

In Flanders fields the poppies blow
Between the crosses, row on row,
That mark our place; and in the sky
The larks, still bravely singing, fly
Scarce heard amid the guns below.
We are the Dead. Short days ago
We lived, felt dawn, saw sunset glow,
Loved and were loved, and now we lie,
In Flanders fields.
Take up our quarrel with the foe:
To you from failing hands we throw
The torch; be yours to hold it high.
If ye break faith with us who die
We shall not sleep, though poppies grow
In Flanders fields.

Last month, I was in Ottawa and visited the National War Memorial located at the intersection of Elgin and Wellington streets, kitty corner to Parliament.   The Monument, somewhat ironically, was dedicated in May 1939 to honour the war dead of Canada.  Ironic, of course, because the Second World War broke out in Europe barely three-and-a-half months later. 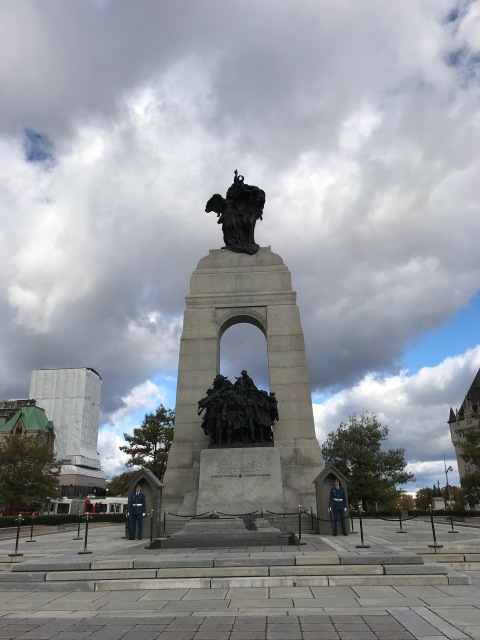 It was whilst staring at this monument that something really struck me about our cenotaphs and war memorials: they tend to date from the First World War.   In this case the artillery is that of the First World War, down to the cavalry on horses.  These monuments may include the names of Canadian soldiers who served in conflagrations before that one, of course, such as the Boer War.  But it is the First World War dead who appear in great number.  And the war dead of later wars, including the Second World War were added to the original monument.  They were not the original soldiers, and whilst their sacrifices are the obvious equivalent, these memorials date not from their war(s), but the Great War.

And so these original soldiers, those who fought and died in the First World War were the baseline for the Canadian military and, even if this wasn’t the first time that war was made real for Canadians, it was the first time it was made real on a national scale.  And even if the First World War left a complicated legacy on Canada, it remains that it was perhaps the first great crisis the country faced.  And it gave rise to a series of stories, some true, some mythical, about the import of the war on the still young Dominion at the time.

§ 2 Responses to The Great War and Monuments in Canada

You are currently reading The Great War and Monuments in Canada at Matthew Barlow.