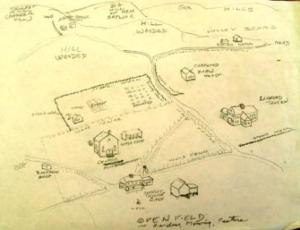 About 18 months ago, I wrote this piece about the old Town Commons in Hawley, Massachusetts. I was struck by the history of what could no longer be seen in Hawley at the Town Commons where, in the mid-19th century, there was a vibrant townsite.  Hawley also stirred up my own memories of having lived in a ghost town as a teenager, on the old town site of Ioco, British Columbia, now a part of Port Moody, BC.  But Ioco, which will eventually become condos, I’m sure, was a (sub)urban townsite.  Hawley is a town a few miles west of the Middle of Nowhere.

In urban centres, we see the ruins of past civilisations all around us, whether they are palimpsests of old advertisements on the sides of buildings, or the ruins of buildings, still dotting the landscape.  Indeed, I wrote my doctoral dissertation and a book on a neighbourhood that was, at least when I started writing, a ruin: Griffintown, Montréal.  A decade ago, the landscape of Griffintown was an urban ruin, the foundations of the old Irish-Catholic Church, St. Ann’s, poking through the grass of Parc St. Ann/Griffintown; the rectory of the French Catholic Church, Ste-Hélène still stands, but the church is long gone, just a few corner stones and the remains of an iron fence are left.  But this is a city, and cities, we are constantly reminded by scholars, poets, novelists, film-makers, etc., are living organisms, built to be rebuilt, constantly evolving and changing. By definition, then, the rural landscape is unchanging and constant.

Don’t believe me? Spend a bit of time reading literature set in the countryside.  Or watch movies. Read poems.  The landscape of the country side is eternal and unchanging.  Entire nations have been built on the mythology of the countryside (I’m looking at you, Ireland!).  Here in Québec, Maria Chapdelaine, a major novel of the early 20th century nationalist school explicitly tied the virtue of the nation to the land. The anti-modernists of a century ago celebrated the unchanging “natural” landscape of the countryside as a tonic for the frayed nerves of modern man.  In Canada, the Group of Seven built their entire careers/legends on representing Ontario’s mid-North back to us as the nation.  Watch a Molson Canadian ad these days, and you’ll learn that Canada has more square miles of “awesomeness” than any other country on Earth.  And all that awesomeness is somewhere in the wheat fields of Saskatchewan. But the rural landscape DOES change and evolve, as the Old Hawley Town Commons will tell you.

This was brought all the closer to me in late November, when I travelled out to Saint-Sylvestre, Québec, which is located about 70km south of Québec City, in the Appalachian foothills.  I was there because a long time ago, I wrote my MA thesis on the Corrigan Affair, which erupted in Saint-Sylvestre on 17 October 1855 when Robert Corrigan, an Irish-Protestant bully, was beaten to death by a gang of his Irish-Catholic neighbours.  The mid-1850s saw the height of sectarianism in Canada and a murder case involving the two groups of Irish proved to be too much for many Anglo-Protestant Canadians to take and a national crisis broke out.  By the time the Affair was over in 1858, not only had Corrigan’s murderers been acquitted of all charges, the McNab-Taché coalition government had fallen. All these years later, I had it in my mind that it was time to do something with the Corrigan Affair.  I had done my best to avoid it after I finished my MA, I did attempt to write an academic article, but it seemed to me to be too good a story to be wasted in a journal article that no one would ever read.  So I have decided to write a book that no one will ever read, but at least a book is a physical thing, something to offer tribute to this rather amazing story that erupted onto the front pages of newspapers across British North America from a rural backwater. So it was out to Saint-Sylvestre to meet Steve Cameron, a local man who has a deep interest in the Corrigan Affair and the history of the Saint-Sylvestre region in general. 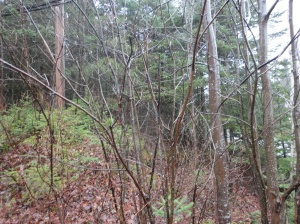 Steve offered to give me the grand tour of the landscape, where the Corrigan Affair took place.  I don’t really know what I expected, but I certainly didn’t expect what I saw: the entire landscape of Saint-Sylvestre and the landscape of the Corrigan Affair is gone, completely changed in the 155 years since Corrigan’s death. He was beaten on the county fair grounds; the site where he was beaten is completely non-descript today, just a corner of a farmer’s field.  Corrigan’s homestead is covered with scrub and a random cross someone threw up sometime in the past century.  Where the farm of Corrigan’s friend, Hugh Russell was once located there is nothing but high tension electrical wires, forest, and a dirt road passing by in front.  There is no evidence of human habitation ever having stood there.  Where the Protestants had their burial ground here in the backwoods of Saint-Sylvestre/Saint-Gilles, there is nothing left but a stone wall, though the grave yard has been carefully and lovingly restored by Steve’s organisation, Coirneal Cealteach. 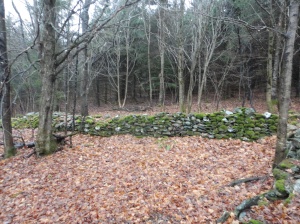 Old Anglican grave yard in the backwoods of Saint-Sylvestre

In short, the rural landscape is just as dynamic of that of the city. In Saint-Sylvestre, the mostly Irish-Catholic farmers were settled on poor farming land in a harsh and unforgiving landscape; their descendants left.  And in their stead, nature reclaimed its place. When I first began studying Griffintown a decade ago, Talking Heads’ song “Nothing But Flowers” kept creeping into my head as I pondered the ruins of the churches, the trees growing in vacant lots and the vegetation in the cracks of the concrete.  But “Nothing But Flowers” applies just as much to Hawley or Saint-Sylvestre or countless other rural landscapes once settled by humans who have long since moved on.

§ 9 Responses to Rural Palimpsests; Or, the Changing Rural Landscape

You are currently reading Rural Palimpsests; Or, the Changing Rural Landscape at Matthew Barlow.