Getting Redevelopment and Community Right

Yaletown in Vancouver has undergone massive redevelopment in the past two decades.  It was once the site of Expo 86 along False Creek, and before that, an urban wasteland (actually, after Expo, too).  But today, it is a sea of glass towers; one statistic I’ve seen said the population just in Yaletown approaches 30,000, though I find that hard to believe.  All along False Creek is a string of residential condo towers; all along Pacific Boulevard, from Granville to Cambie streets there are towers and pied-à-terre condos.  Some of them even look nice.

As I went out for my morning run today (I’m staying with my sister here), I noticed something: this is actually a well-thought out urban redevelopment.  There’s a billboard on Pacific Blvd that says that Concord, one of the developers is building community here.  It’s easy to scoff at that claim.  But it’s not a ridiculous claim. My sister knows her neighbours.  More than that, she has friends amongst them.  Dog owners around here have claimed a patch of Cooperage Park on False Creek as a dog run.  They police each other, making sure nobody leaves their dog doo behind.  They also police each other’s dogs, making sure they behave.  There’s a bunch of cafés and restaurants along Marinaside Drive (I know, what a horrible name), and they’re populated with regulars, the neighbours around here.  People nod and say hello to each other on the streets and along the path that goes along the bank of the water.

There’s more, though. There’s actual, real parks here.  Cooperage stretches almost from the Plaza of Nations at the head of False Creek towards and under the Cambie Bridge.  A few blocks on is David Lam Park, which lies between Pacific, Drake, and Homer streets.  But it’s more than that.  These parks are actually used.  There’s basketball and tennis courts at David Lam, and a playground. An elementary school is on David Lam and the children can be seen playing in the park at recess and lunch and after school.  The path along the water is almost always busy with joggers and cyclists, as well as roller-bladers and walkers (Vancouver was experiencing one of its trademark torrential downpours when I was out taking pictures today, thus, aside from one intrepid jogger, there was no one out playing).

When I lived in Vancouver in the late 90s, there was a lot of hand-wringing about the redevelopment of the old Expo site. The city was determined to increase density, to follow the model of the West End, which is apparently the densest neighbourhood of North America that’s not Manhattan.  So the old Expo lands saw these condo towers grow out of the ground.  The major difference between the West End, which lies on the other side of the Burrard and Granville Street bridges and this area, which is part of the larger Yaletown neighbourhood, is that Yaletown tends to be resident owners, whereas the West End is largely rental units (there are, of course, many exceptions to both). 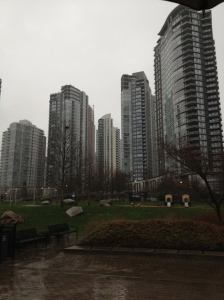 At the end of the day, however, Vancouver got it right.  There is community here, the public spaces are widely used.  The cafés and restaurants are, with the exception of one Starbucks (this IS Vancouver, after all) independent operators (this isn’t as true as Pacific Blvd., the main east/west thoroughfare, which has plenty of chains in between and around the indie stores).  This also contributes to community, as the small business owners connect to their local community in a way that Starbucks and Quiznos can’t.  And studies show that locals are more likely to patronise these small businesses than the chains.  Indeed, this morning, Bojangles, the local indie café was busy, filled with both commuters on their way to work and those with more time to sit and enjoy their coffee.  Whereas the Starbucks, while it got a fair amount of foot traffic from commuters, it doesn’t have the same community feel.

I fear, however, that Montréal is getting it wrong with Griffintown.  The early plans for the massive redevelopment of Griff by Devimco called for massive shopping areas and big box stores.  The commercial developments were supposed to pay for the residential developments.  As for anything else that urban residents might need, well, “Whatever,” Devimco seemed to say.  Of course, Devimco’s bold plans were thwarted somewhat by the recession.  The redevelopment is now a mixture of Devimco’s big District Griffin (how tragic it would be to have that old English name on the neighbourhood, eh, OQLF?) and a smattering of smaller developments, with the massive redevelopment of the old Canada Post Lands at the other end of Griff at the foot of rue Guy.

Missing, though, from all these redevelopment plans in Griff was any idea of what residents were supposed to do.  There still are no plans for schools in the neighbourhood.  It wasn’t until early 2012 that the Ville de Montréal announced that it had earmarked some money to create public parks.  It’s still not entirely clear where they’ll be, other than the already extant Parc St. Ann/Griffintown at the bottom of rue de la Montagne at Wellington.  And given Montréal’s history of development and redevelopment, and the fact that the mayor, first Gérald Tremblay and now Michael Applebaum, just has dollar signs in his eyes when talking about Griffintown, I have zero hope of Griffintown being redeveloped right.  In fact, I am almost positive it will be a disaster.

It’s tragic, as Montréal has a chance to redevelop a huge swath of valuable land at the foot of downtown, to emulate what Vancouver did with Yaletown in the 90s and 00s.  But it has done nothing to suggest that it will get it right.  And that’s trafic.

§ 2 Responses to Getting Redevelopment and Community Right

You are currently reading Getting Redevelopment and Community Right at Matthew Barlow.