The Symbolism of Maps

As noted, I’m reading Peter Ackroyd’s epic London: The Biography.  As might be expected of such a tome, it’s a treasure of information, some interesting, some not so much.  But in reading it, I’m reminded of the London Underground map.  Like the transportation network in any major city, London’s was originally a hodgepodge of private companies providing service, which were eventually centralised and then nationalised.  The maps were created for what maps are always created for: to help people navigate their way around the system.  The first map dates from 1908.

The basic template of this map remains in use today.  As Ackroyd notes, “The original Underground map bears only approximate relation to the location of lines and stations, but it is so aesthetically pleasing that its lineaments have never been changed.”  In other words, today’s Tube map is a representation of reality, it only gives a vague idea of the system.  Countless Londoners and tourists both state at the map with great intensity trying to figure out where to go.  And while the map does give a vague idea of where things are, it is highly impressionistic.  But, boy, it sure does look great, doesn’t it?

The thing I find most interesting about the London Tube map, though, is that it has become the template for subway/métro systems the world over.  These maps are stylistic triumphs, but they are, quite frankly, useless as maps.  Nonetheless, as urbanites, we are trained to be able to read these maps and navigate our way around the city.  And let me also point out that cities are incredibly complex organisms.  Navigating them has become second nature to us, but if we stop and thinking about it, what we can do on a daily basis without thinking too much is pretty impressive.  At any rate, these transit maps.  Consider, for example, the Montréal métro map. It’s a highly stylised representation of the métro and commuter rail lines in the city and its surrounding areas.  Nothing other than the stations and ultimate destinations of the train lines are identified.  In order to read the métro map, one requires a basic knowledge of the geography of the city. 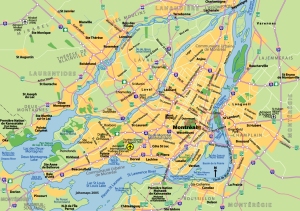 Compare the métro map with that of the city as a whole.  The métro map only covers a small part of the central portion of the Île-de-Montréal.  Of course, that’s where the métro is. And note that the map of Montréal as a whole is missing perhaps the biggest geographical fact of the island, other than it is an island: Mont-Royal.  That, of course, suggests that maps in general are just impressionistic and little more than symbols of what it is they are meant to represent. 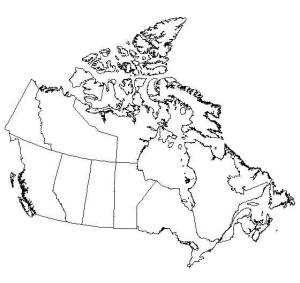 This is a point that I like to make to my students about the great explosion of map-making in the West during the Age of Exploration, as well as the process of state formation in the Early Modern era: I ask them to think about what it is that they know makes them American (or Canadian, when I lived in Montréal), what makes them know that they in the upper right corner of the country know that all those people down in the lower left hand corner are all American.  The map of the United States.  As Benedict Anderson notes in his still brilliant Imagined Communities (seriously, this remains one of the greatest books I’ve ever read), part of the process of state-formation is achieved through the creation of a logoised map that is then emblazoned into the brains of the citizenry.  When someone says the word “Canada” to me, many things flash through my head, but amongst all these images is the outline of the map of Canada.

In other words, maps aren’t really anything more than symbols of what it is they represent.  We are trained in map reading from a very young age, so that even as children we can look at a map and instantly recognise what it is we’re supposed to be seeing.

§ 4 Responses to The Symbolism of Maps

You are currently reading The Symbolism of Maps at Matthew Barlow.